HARD FOUGHT DRAW FOR UNDER-10 SQUAD

Team rallied back twice to tie against Sporting SD

CHULA VISTA - The heat was rough, the opponent was tough. But the Xolos Academy FC Under-10 team fought back and earned a 2-2 draw against Sporting SD on Sunday morning at Hilltop High School.

Cold water was used to pour on the player's heads just as much as it was used to hydrate.

The visiting Sporting SD took the lead early in the game and forced the Xoloitzcuintles to chase the game.

Ricardo Guzman tied the game before the halftime break. Guzman shot the ball from long distance form the right side of the field. The ball sailed over the away goalkeeper's head and into the top corner of the far left post.

Having lost its lead, Sporting SD came out pressuring in the second half. It's pressure paid off as it took a 2-1 lead over the Xoloitzcuintles.

Once again down by a goal the Xolos Academy FC boys went into attack mode and pressured for another equalizing goal.

With less than a minute left in the game, Guzman set up to take a corner kick on the right side. Xoloitzcuintles sent all players to the box, just one defender remained at the edge of the box and the goalkeeper at midfield.

Guzman sent in a long corner kick, which found teammate Victor De Vaca in the middle of the 6-yard box. De Vaca got a slight touch on the ball and sent it to the back of the net and set off the celebrations. 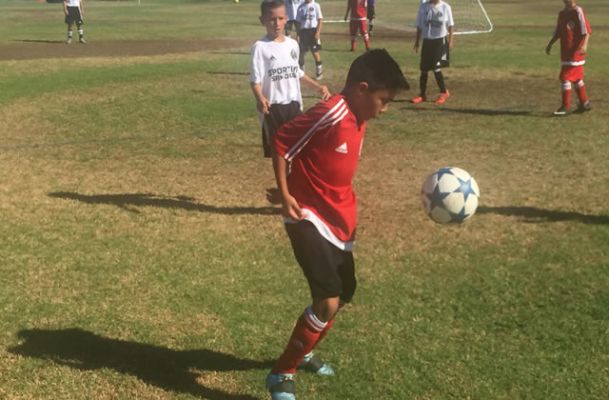