ESCONDIDO, Calif. (Oct. 6, 2016)-Posters, jerseys, scarfs, soccer balls, cell phone, socks and dogs. Those were some of the items Club Tijuana Xoloitzcuintles fans brought to an autograph session at the Cox Solutions Store in Escondido Thursday.

More than 200 fans got to meet the former Mexican National Team coach, Martin and Juninho. The group posed for photos and the traditional “selfie” while signing whatever came across the table. Herrera even signed a pair of soccer socks with his image on them. Juninho signed the jersey on the back of a young Xoloitzcuintle dog. Herrera stayed to attend to fans until the line had ended. He proceeded to take pictures with the Cox staff and posed for more photos.

“This is great work done by Club Tijuana to bring us closer to our neighbors and countrymen,” Herrera said. “This is very good. Just like they go to the stadium it is important for us to be close to them.”

Amid the crowd of fans was Jose Trejo, a longtime Club Tijuana follower who wore an authentic version of the original Club Tijuana game jersey.

“I bought this at the CREA sports facility where they began to play,” Trejo said. “It was during the second game the Xolos ever played. We knew then the team could make it far and now we support them in the same way as on day one”

Club Tijuana has always taken pride in staying close to the community on both sides of the border and it plans on continuing to do so. Herrera wants to be part of it.

“We will try and have more of these events to be closer to them,” Herrera said about fans North of the border. “If they can’t come see us on the field, we will come to them.” 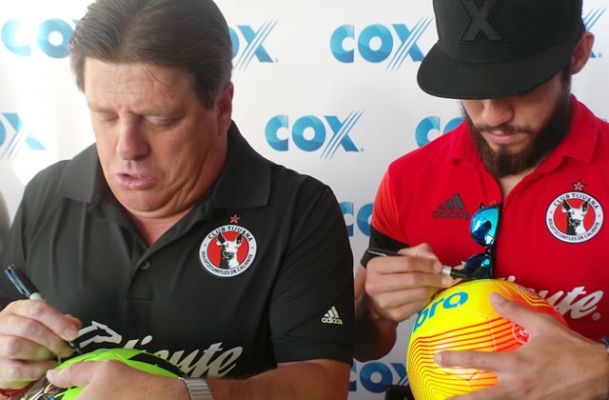