COMMITMENT TO EDUCATION AND SOCCER

CHULA VISTA –Club Tijuana Xoloitzcuintles de Caliente continues its dedication to being part of the community on both sides of the border. The Xoloitzcuintles showed proof of that commitment Saturday July 19 when it took part of the Youth And Leaders Living Actively indoor soccer tournament at the Futbol Factory.

The Youth And Leaders Living Actively, known as YALLA, the Xoloitzcuintles, the Fubol Factory and Univision Radio Group in San Diego (106.5 and 102.9) held the tournament for more than 150 immigrant and refugee kids. Children were divided into eight teams who competed in a round robin style tournament that feature a semi final and a championship match.

“Youth and knowledge don’t always go hand in hand so to get these kids to come in and be so dedicated to their academics it wouldn’t be possible without football,” said YALLA founder Mark Kabban. “When they see a club like the Xolos at a professional level who they have pride and love for, to spend an afternoon with them it just gives them that validation that they are on the right track. It’s rewarding them for working hard.”

YALLA is a non-profit organization that works with immigrant and refugee children in elementary school through High School who are new to the United States, need guidance on how to adapt to the nation and find a place to live. YALLA provides an educational curriculum and therapy for kids who have gone through trauma in their home country. The program is free. Kids get an education while developing their soccer skills. The young athletes displayed those skills during the tournament Saturday.

Club Tijuana’s official mascot the Xolo Mayor was part of the event. The mascot made a special entrance before posing for photos and participating in some of the activities the kids went through.

“We’ve served more than 700 kids and it all started with one team,” Kabban said. 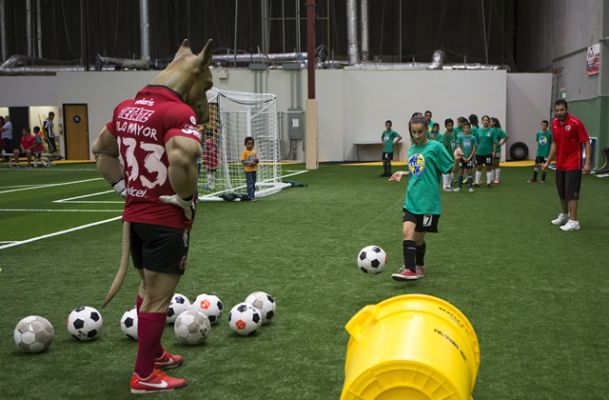