Lopez-Fajardo’s goal led to a flurry of goals. The Xoloitzcuintles scored four more unanswered goals in the first half.

Jiovani Del Rio scored the second by finishing a well-made counterattack that put Del Rio one-on-one with the Hotspur goalkeeper, and smoothly slid the ball into the back of the net to double the Xoloitzcuintles lead.

Javier Navar took advantage of a poor clearance from the Hotspur defense that put him free on goal and put it away for a 3-0 Xoloitzcuintles lead.

Hotspur USA’s defense was unable to deal with the aerial threat of the forward line of the Xoloitzcuintles. A poor header back pass put Del Rio one-on-one once again. This time, he drew the goalkeeper and squared the ball to his open teammate Daniel Serna for a tap in and a Xoloitzcuintles 4-0 lead heading in halftime.

In the second half, the Xoloitzcuintles were less direct focusing more on a possession based style, keeping the ball and frustrating the opponent.

It was Sanchez that stepped up and slotted it away to add to the Xoloitzcuintles lead, 5-0.

The Xoloitzcuintles never let up, thanks to a true captain performance from Adan Rosales, who played the enforcer in the midfield for the Xoloitzcuintles. He also dished out many instructions throughout the game and kept the team focused. Rosales kept his team grounded by asking them to treat the match as a scoreless game despite the lopsided advantage.

“It’s still 0-0 guys,” Rosales barked as his teammates to encourage from switching off.

Hotspur were able to prevent the shutout with a goal after a corner kick led to a loose ball inside the Xoloitzcuintles box. The visitors were able to pounce on it to put the Hotspur on the board.

The Xoloitzcuintles will hope to replicate this performance in their next game against Atlante SD  Staurday Oct. 8 at Cesar Chavez Park. 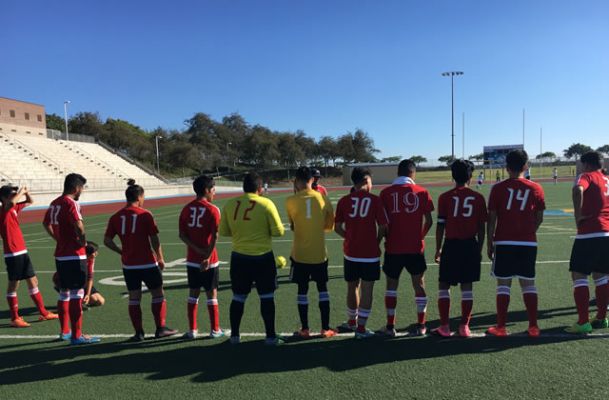