A DAY OF SOCCER IN SAN DIEGO

Club Tijuana’s Reserves (Fuerzas Basicas) team crossed the border to play in a friendly match against the California Interscholastic Federation State Champion Southwest High School Raiders boys varsity team. The Raiders scored in each half to beat the Xoloitzcuintles reserves 2-1 in a rare meeting between youth teams. More than 300 fans showed up to witness the tightly contested match.

Fans also got a chance to have their young athletes participate in a series of free soccer clinics held right after the friendly match between Club Tijuana’s reserves and Southwest High. More than 100 kids took part in the free clinic that included local children from the local AYSO chapter. Children in the Under-6, Under-8 and Under-10 categories went through drills and fun activities instructed by Club Tijuana Under-17 coach Ignacio Ruvalcaba and his Xolos Academy FC Chula Vista staff and some of his players.

The participating children went through warm up drills and stretches, ball dribbling exercises, agility drills and ball striking tasks. The same group of young athletes got a chance to pose for pictures with the official Club Tijuana mascot, “Xolo Mayor.”

Xolos Academy FC Administrating Director Ramon Vazquez talked about the day’s activities and its purpose within the community.

“We had an entertaining game in which Southwest High beat us but it was a great game,” Vazquez said. “The home stand was full and they got a good view of the action. Then families got to participate in the free clinics in this social responsibility event. We are organizing these type events with the City of Chula Vista, AYSO and the community to try and bring more kids to our academy and show what our team is about.”

Vazquez talked about the opportunity children have to be part of a soccer program that is directly associated by a professional team, in this case, Club Tijuana.

“There is room available in our academy,” Vazquez said. “We will begin tryouts for the Under-15 to Under-18 categories in April. We encourage players to sign up if they want to learn how to become professionals. We are here to teach them and help them.”

Jose Sanchez, defender on Club Tijuana’s Under-17 squad talked about having the chance to volunteer and help teach during the free clinics.

“It’s nice to see that they show enthusiasm from a young age,” Sanchez said. “Every player should have from a young age all the way to the First Division. I’ve always had that drive and Xolos have given me the chance to keep it going.”

Pablo Flores, the Club Tijuana Under-17 goalkeeper, talked about what it meant to him to be an instructor at the clinic.

“It is very nice that they consider us to be an example to follow,” Flores said. “I can only tell these kids to give it their all. This is a beautiful sport and you’ll never be bored of it. It is the best thing you can do instead of being in drugs and gangs, be part of this sport.”

Families were able to register to the Xolos Academy FC during Saturday’s events and registration will continue for the 2014-2015 season. Those interested can register during weekly practices at Hilltop High in Chula Vista or at the academy designated office at 861 Harold Place Suite 206 Chula Vista, CA 91914.

Practices are Hilltop High are as follows: 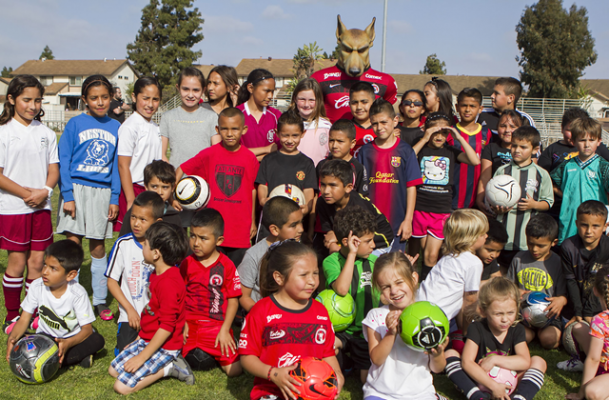